Crohn’s Disease: All You Need to Know 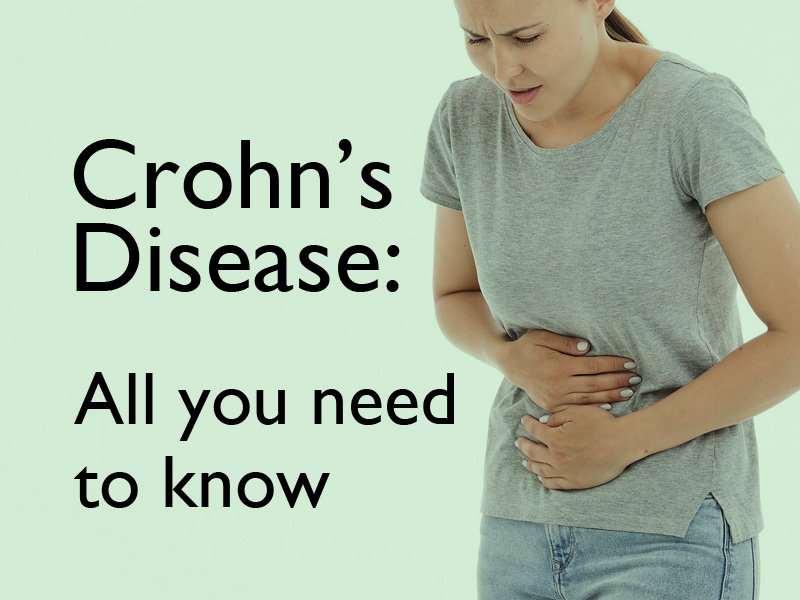 Have you been making frequent “explosive” trips to the bathroom? Do you find yourself doubled up with abdominal pain more often than not? Has your couch become your best friend (second only to the toilet)? While diarrhea, abdominal pain, and fatigue are not new, if they’re showing up often enough to negatively affect your life, then you may have Crohn’s Disease.

So, what’s a definition of Crohn’s Disease?

This disease falls under a category of diseases called inflammatory bowel disease (IBD). IBD is just what it sounds like – inflamed bowels and inflammation of the digestive tract. Inflammation can lead to abdominal pain, severe diarrhea, fatigue, weight loss, and malnutrition.

Inflammation caused by Crohn’s Disease affects different areas of the digestive tract in different people and often spreads into the deeper layers of the bowel.

Crohn’s Disease can be painful and debilitating – and can lead to life-threatening complications. It’s a complicated disease. But for this article, we’ll take a broad overview of Crohn’s Disease 101.

When Crohn’s Disease is active, its symptoms can range from mild to severe. Usually, symptoms develop gradually, but sometimes they will pop up without warning. That’s because Crohn’s Disease can “come and go.” Sometimes you have symptoms, while other times, you have none. Often these episodes of symptoms are referred to as “flares.”

The generalized symptoms may include:

The term Crohn’s Disease can be a little confusing because there isn’t just one type of the disease. There are five main types of Crohn’s Disease. Each type has its own set of symptoms and is defined by the location of inflammation in the gastrointestinal tract (GI tract). For example:

Unfortunately, the exact cause of Crohn’s Disease remains unknown. In the past, doctors thought that diet and stress were the culprits, but further research has shown that these factors may aggravate the condition, not cause it.

Now researchers believe that factors such as heredity and a malfunctioning immune system may play a role in its development.

If it turns out you have Crohn’s Disease, the most important thing you can do for yourself is to maintain a healthy lifestyle, even when your disease goes into remission.

Crohn’s Disease isn’t just limited to annoying symptoms. It can also lead to complications like

Just like there’s not yet a direct test to diagnose Crohn’s, there isn’t yet a cure for Crohn’s Disease – and there’s no one-size-fits-all treatment. Each individual reacts differently, so finding the most effective forms of treatment can take time.

Doctors tend to take a two-fold approach in treating patients with Crohn’s Disease. The first is to reduce the inflammation that triggers the symptoms. The second is to improve the long-term prognosis by limiting complications. A two-fold approach can lead not only to symptom relief but also to long-term remission.

What you could expect as part of a Crohn’s treatment plan:

When nothing else works

Diet and lifestyle changes, drug therapy, and other treatments don’t always relieve symptoms. If that’s the case, then your doctor may recommend surgery. Although this does not cure Crohn’s Disease, surgery can bring short-term relief.

During surgery, the surgeon removes a damaged portion of the digestive tract and connects the healthy sections. Unfortunately, recurrence is common near the reconnected tissue. Almost half of the people who suffer from Crohn’s will have at least one surgery during their lifetime.

Coping with, and support for, living with Crohn’s

Although Crohn’s can come and go, it never goes away for good. Living with Crohn’s Disease takes a physical and emotional toll. Severe symptoms may have you constantly running to the toilet. Milder symptoms like gas and abdominal pain can make it challenging to be in social settings.

When your life is ruled by Crohn’s, it’s easy to slip into depression. It’s usually crucial to your mental and emotional health to join a support group. Part of your treatment plan should also include talking with a mental health professional who’s familiar with the emotional difficulties associated with inflammatory bowel disease.

When To See a Doctor

We know that many of the Crohn’s symptoms seem run-of-the-mill, but if you have persistent changes in your bowel habits or any of the following symptoms, it’s time to see your doctor.

Are you struggling with Crohn’s Disease?

The Nava Method focuses on integrative wellness, and we customize treatment specifically for each client. Not only that, but Crohn’s Disease is among the many things we address. It makes sense to let us help you improve your symptoms. Contact us for a consultation today!

Summary
Article Name
Crohn’s Disease: All You Need to Know
Description
We cover all the information you need about Crohn's Disease including symptoms, complications, diagnosis, treatment, and lots more. Plus when you should see a doctor if your symptoms persist.