Depression During Menopause: Why Antidepressants Are Not Enough 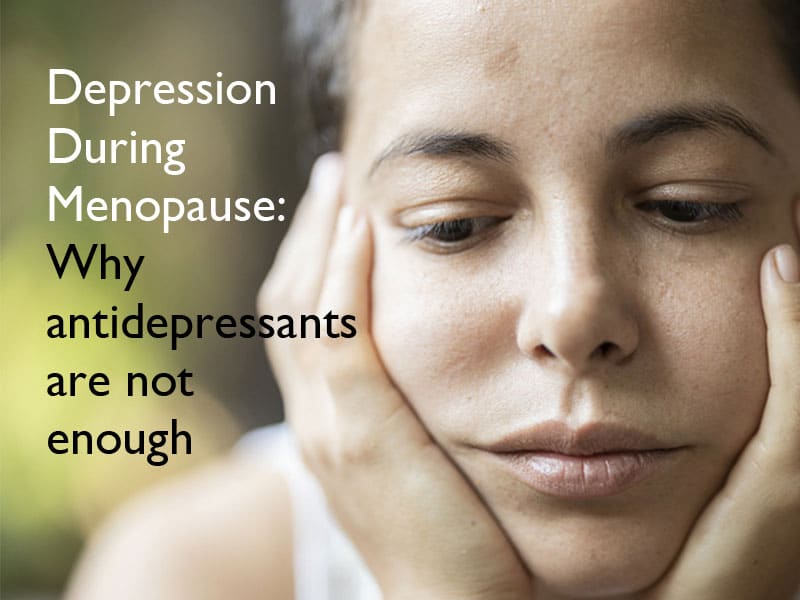 Depression during menopause is serious, and it can take you down hard. Especially if you’ve been struggling with depression during perimenopause, which can last for up to 13 years beforehand.

Can you imagine spending a decade suffering from depression, only to be faced with many more years of depression to come? But maybe you don’t have to.

Feeling Low During Perimenopause and Menopause is Normal

Your body is going through a lot of changes. The hormone rollercoaster can deplete your libido to astounding lows and cause you to feel constantly fatigued.

It’s also common for women to go through a grieving period as they come to accept they’ll no longer be able to bear children. That they’re moving into a new phase of life. The grief process may include feeling sad, angry, or depressed. These feelings, and hormonal mood swings, will come and go. But if depression settles in as a constant visitor, you need to seek help.

This level of depression can be debilitating, so much so that doctors consider it a disease. Major depression affects your ability to experience normal mood states. The symptoms of major depression include:

It’s unusual for a woman to become depressed for the first time in her life during menopause. Most women who suffer from major depression during menopause have been depressed during their lifetime at one point or another.

However, women become more vulnerable to depression during the transitional time known as perimenopause. During perimenopause, your hormones become unstable and your menstrual periods lighten and become less frequent. For some women, minor mood problems, insomnia, and hot flashes common during perimenopause can progress to a more severe mood disorder known as major depression.

Why Do Some Women Experience Depression During Perimenopause?

Looking at these in turn, biologically speaking, your body begins to make less estrogen as you transition into menopause. Eventually, your ovaries will stop producing estrogen altogether. One reason for mood swings and depression during perimenopause is because estrogen interacts with chemicals in the brain that affect mood. This causes a change in brain chemistry.

Metabolic dysfunction can lead to depression if you don’t have enough of the proper vitamins and minerals to maintain healthy serotonin and dopamine levels.

Gut infections/dysbiosis can increase risk for depression because a significant amount of your dopamine and serotonin are produced in the gut. They can be dramatically influenced by the microbes that live down there!

If you have a family history of depression, then it’s possible your genes can carry a recipe for depression.

Hot flashes and insomnia due to hormone imbalances can cause physical and emotional distress. Transitioning into menopause, itself, can be a highly stressful event for many women.

Treatment for Depression During Perimenopause

Most providers will prescribe an antidepressant and be done with it. But antidepressants aren’t enough, as we indicated in our blog title.

In fact, if your doctor prescribes you an antidepressant and it isn’t providing the relief you need, then consider this. Your depression can worsen because you get frustrated and believe there’s something wrong with you. And you end up in a vicious cycle of obsessive negative thinking.

If you’ve been there, then you know what we’re talking about.

If you look at those primary causes of depression, you’ll see why antidepressants aren’t enough: They rarely relieve major depression in perimenopausal women. Instead, a better choice is a combo of

Hormone Replacement Therapy can add the hormones that your body lacks. Your practitioner can administer estrogen orally by pill, through the skin by a patch, or under the skin by a pellet. Progesterone doesn’t treat or prevent perimenopausal depression. But it’s often combined with estrogen to balance hormones and relieve the symptoms of menopause.

Two types of therapy can be very beneficial to women during this time.

There are other holistic treatments like nutrition and acupuncture. These, too, can be highly beneficial for women suffering from depression during perimenopause.

If symptoms are mild and blood testing discovers a hormone imbalance, then hormone replacement therapy alone may do the trick.

Because of how depression works on the brain, thoughts, and mood, you may not realize that you’re depressed. In this case, it’s crucial that you listen to trusted friends, family members, or healthcare providers who express concerns about your mood or thinking.

A consultation with a trusted healthcare provider can help you get a better perspective and the support you need. The consultation will be like any other doctor’s appointment. You’ll talk about your family history, symptoms, and concerns. Then the doctor may run some tests to diagnose any underlying conditions. After that, they will talk with you about treatment options.

At Nava Health, we want you to live your best life – even during perimenopause! So, if this has helped you think things through – or if you want to ask further questions – contact us for a consultation today!

Summary
Article Name
Depression During Menopause: Why Antidepressants Are Not Enough
Description
There are several causes of major depression during menopause, and other treatments may well help you regain your life better than using antidepressants. Read on to learn more.